I love learning from other successful freelancers and online business owners.

And from what you’ve told me, you do too! So each week (almost), we’re going to interview someone new for us all to learn from.

Today, we’re lucky enough to have Rosemarie from BusyBudgeter.com as our Freelancer Spotlight guest! She’s sharing her journey into blogging for a living, and the continuous balancing act between time spent with her family and time spent growing her business. Thanks for chatting with us, Rosemarie!

What do you do and how long have you been in business?

I’m a full-time blogger. Which is a super awesome job!

I get to write blog posts and newsletters teaching people who are overwhelmed with balancing work and life how to reduce their spending and save more money. I started in September of 2014 with a brand new blog, so it’s been about 19 months now.

What got you into blogging?

I had spent about two years blogging as a hobby never realizing how much money you can make from it.

I originally started when I was pregnant with my son. It was a tough pregnancy and I needed to do something creative that let me sit down and relax.

I received an email in 2014 from Ruth Soukup (of Living Well, Spending Less) about Elite Blog Academy where she mentioned that you can make a full-time living from blogging. I was floored!

When I signed up, I was expecting (and if we’re being totally honest – mostly hoping) to make about $1,000/month.

It’s been so much better than I expected!

What’s been the most challenging part of full-time blogger so far?

The toughest part has been understanding the relationship between time and money.

I came from a strong budgeting background. We cut our spending by over $23,000/year just to be able to afford for me to stay home with the kids. I was used to doing everything myself to save money.

Once you start making money blogging, then time is money.

So, everything that I do during the day, I’m paying myself $300 to do since that’s the amount that I could have made if I blogged instead.

It took me forever to realize that I could be paying a VA $15/hour to answer many emails, instead of paying myself $300/hour to be an inefficient VA. The same goes with bookkeeping, photography and even personal things.

Once I made that connection and got over my fear of spending money, my income doubled in a month and only grew from there. 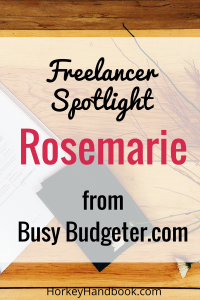 Did you ever want to quit or give up?

I was spending hours every week and not seeing much success. I started to think I was crazy (so did my husband if we’re being totally honest here).

I had made myself the deal that I would stick with it for the full year though. After a year, I could walk away without ever wondering what could have been.

That turned out to be a great decision because eight months in, I was making over $2,000/month. Once that happened, blogging got so much easier.

This is by far the easiest (and most fun!) job that I’ve ever had!”

What would you love to pay someone to take off of your plate?

Oh my gosh. Can I make a list? This is a list that I’m currently working through and taking off my plate. I’ve already hired people for most of it, but I still have a lot to do!

What task in your own business would you like to do more of?

Those are the best parts of my job and my favorite tasks. I wouldn’t call myself a graphic designer, but I love making graphics for Pinterest.

I’ve spent a lot of time figuring out what works there.

What are some big successes you’ve had recently?

I made $39,000 from blogging in February alone which is an insane amount of money to me.

I never, ever believed that blogging could be this profitable. That’s likely the biggest business success of my life!

What are some specific strategies, tactics or pieces of advice that helped you grow?

Investing in education was huge for me. At the time, I rarely spent money on myself. So when I dropped several hundred dollars on Elite Blog Academy, it set a fire in me to take it seriously.

I immediately started treating the blog as a business, long before it actually was.”

The other thing that benefited me greatly was investing most of my social media efforts into Pinterest.

Pinterest is by far the easiest place to get quick traffic growth (assuming that your niche is targeted towards women) and also the easiest to automate (thanks to Boardbooster), so that decision paid off quickly for me.

(Gina’s Tip: Pinterest has been really helpful in my business too. Check out my insane Pinterest growth in just four months.)

How are you growing and monetizing your blog?

I focus on primarily passive income, so my major sources of income are ad income and affiliate income.

My goal is to work 20 hour weeks while still growing the business so I can spend more time with my family.

That’s a pretty huge goal, but so far it seems to be working out well.

The easiest way to grow your blog quickly is to constantly A/B test things and then go with the better performing result.  A/B testing means that something on my blog is improving every month.

What are you most excited about for your business next?

It took a lot of sacrifice to get to the point that I’m at now, and what I’m most excited about is having the time to really expand on ideas I’ve had in the back of my mind for a year.

I feel incredibly grateful to be in a position to help people who struggle with reducing their expenses and managing their time better.

Every day seems to be even better than the last, so I’m pretty excited about business in general.

Thanks for sharing, Rosemarie!

What’s preventing YOU from starting a blog? Share in the comments so we can break through this barrier together.